The First Step to Talking With Your Partner

I’ve talked with hundreds, maybe thousands of couples in the past 30 years of my career, and one issue I hear all the time is that the two partners just can’t have a productive conversation about a relationship issue.

You might be nodding your head right now, because this happens at some point in almost every relationship, especially if there’s another painful issue going on that a couple doesn’t want to talk about, even though they know they need to.

Today I’m going to teach you the one foundational step that you, your partner, and every couple have to take in order to have a safe talk about any relationship issue.

But first, let’s see what happens when you skip this step. 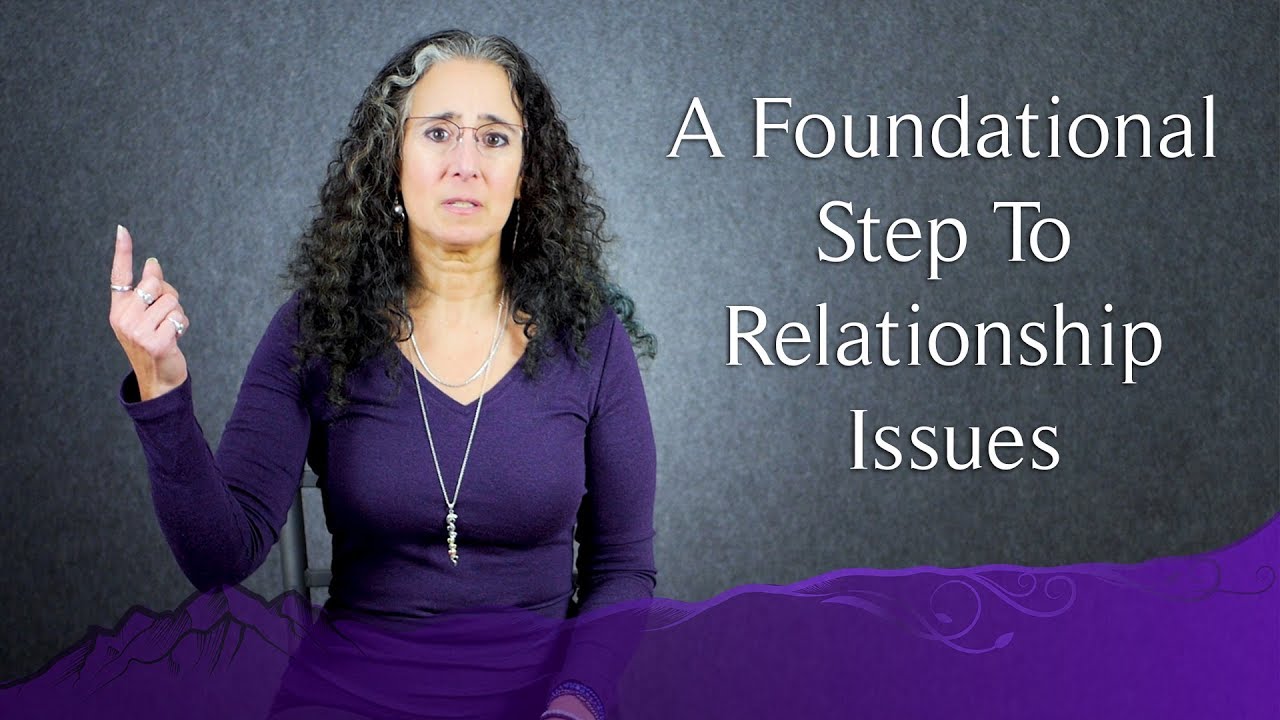 Valentina was devastated when her suspicions turned out to be true. She had felt something was wrong with her husband, Charles for a long time, but every time she asked him what was bothering him or what was going on, he would just deny it. He said, everything was fine until one evening after she saw him texting somebody with quite an interesting smile on his face. She checked his phone the next day and sure enough, she found texts and emails with a woman that clearly revealed he was having an affair.

She confronted him and he admitted it right away. Valentina and Charles had a rough week or two, but then they decided together that they really wanted to work on their marriage. Charles agreed to cut off all ties with the other woman and they committed to working together to try to heal what had happened between them. However, every time they tried to talk, Valentina would find herself overwhelmed by all the hurt and anger that was inside her.

She would feel her stomach turning into a knot. She felt her heart just racing in her chest and she started yelling and shouting. She would shout and curse. It felt like a freight train of emotion that was just overtaking her. And even though she knew her husband, Charles, she’d always been careful to not overwhelm him. She knew she had to keep herself in control to have a good talk with him. But she could not stop herself.

And of course, every time Valentina started talking with Charles, he almost instantly wanted to get out of there even though he had committed to working through this with her and wanted his marriage with Valentina to work. He would feel his body practically twitching with the urge to leave the room. His vision would start getting black and he would almost not be able to even hear her anymore. He would feel himself just shutting down and panicking and feeling like he just had to get out of there.

So Valentina and Charles were trying to have the kind of conversations they knew they had to have to heal from Charles’s affair, but they couldn’t.

Scott felt the blood just drain from his face as he sat beside his wife, Barbara, at his nephew’s wedding. He had felt that they were getting more distant over the past few years, even though they felt comfortable together. He’d just thought it was normal for two busy people with two busy jobs and a house full of kids to grow apart.

But the night before this wedding, they were at a beautiful, romantic bed and breakfast and neither he nor Barbara had made the slightest indication that they were even considering making love with each other. And then at the wedding, sitting there beside Barbara, not even holding hands, they were listening to Scott’s nephew and his partner exchange wedding vows.

Scott was overtaken with was the shocking realization of just how far he and Barbara had drifted from each other since the time of their wedding. He clearly remembered writing his own vows and how meaningful and important it was to him, how much time and care he had taken in writing vows that would convey his love not only to Barbara, but to all the people who loved them.

And sitting beside her at his nephew’s wedding, he saw just how distant they had become. So when they went back home, Scott wanted to talk about this with Barbara. However, every time he tried to talk, he would feel his throat close up. He would start stumbling and fumbling for words. His mouth would get dry, he would hear this ringing in his ears, and he would start to have this kind of feeling of like panic.

And every time Barbara watched Scott try to start talking to her, the tears would spring into her eyes. She wasn’t sure what was going on, but her fear was that Scott was trying to tell her that he wanted to leave her after all these years. And she was so scared. Her stomach would be full of butterflies and she would feel her heartbeat up in the top of her chest. She could hardly breathe.

And then the tears would start pouring out and sure enough, that would stop Scott in his tracks every time. So even though Barbara and Scott wanted to bridge this distance that had grown between them all these years, they were not having success.

Tim was waking up in the middle of the night, unable to sleep, frightened that his relationship with his partner might be beyond repair. He really loved Vic, but ever since the blow out fight that they had had on Thanksgiving weekend, they were in this pattern of fighting and fighting and they didn’t seem to be able to get out of it.

They were really trying to talk like to reasonable adults and clear up what had happened in that Thanksgiving episode and move on. However, every time they’d tried to talk, Tim would be flooded with memories of all the nasty things that Vic had said to him that weekend. And he would feel the muscles in his arms and his back just bunch and clench up. His jaw would become so tight, partly in an effort to bite back the words he was trying not to say. His efforts to have that clear, reasonable conversation just vanished.

At the same time when they started to talk, Vic would get angry all over again at the incidents that had propelled that Thanksgiving episode to begin with. For him, he felt it in the front of his chest and in his neck. It was like his veins were just throbbing and pulsing and all he wanted to do was tell Tim to just shut up.

So these attempts between Tim and Vic to calmly, reasonably talk through what had happened kept falling apart and scared the two of them so much. They were afraid their relationship was beyond repair.

But they all have one thing in common that you probably have in common with your partner. They tried to have good conversations, but as soon as their bodies became overwhelmed, they were no longer able to have a good, safe conversation.

Either they became angry and hurt and said things they regretted, they became scared and wanted to leave, or they shut down and couldn’t hear or see things their partner wanted to communicate.

Whatever the pattern was, even though they were trying to get through the struggles, they couldn’t reconnect to have a thriving relationship. They didn’t feel safe talking with each other.

So here is the one foundational step that they all had to take before they could have a safe conversation:

They needed to learn how to relax their bodies.

When your body or your partner’s body is feeling overwhelmed, your mind is not able to have a good and safe conversation. There’s just no way around that.

Luckily, there’s a painless solution. In fact, it’s even a pleasant solution!

Because fights are hurting your relationship?

My free video series will help you

How to Relax So You Can Talk

Step One: Figure out what helps you to feel deeply relaxed.

What have you done in your life or what could you do that really relaxes you? When your heart is pounding, when your muscles are tense, when your thoughts are racing out of control, or when you want to escape, what helps you relax?

For some people, it’s taking a hot bath or a hot shower.
For other people, it might be listening to a guided relaxation.
For some it’s coloring.
For others, it might be meditation or prayer or some really relaxing yoga.

Figure out what it is for you.

You have to practice and get good at how you can relax your body, not when you’re already tense and you need it, but in the course of your day. A few times a week, practice this method that you’ve chosen to relax and help your body realize that you know how to relax.

Step Three: Relax (or take a break) before talking

When you want to have an important, safe conversation with your partner, relax first. Or if you find yourself in the middle of a conversation and you’re feeling upset and overwhelmed, stop, leave the room and relax, and then come back. You’ll be more able to have that good conversation.

When you or your partner are getting upset, the only way to have a safe and good conversation is to relax your body. Figure out what’s relaxing to you. Practice it, and then use it when you’re getting upset.

Stop talking, take a break, calm down, and relax. This one step can make a huge difference in your relationship and possibly your overall stress levels as well! The benefits of relaxation are massive and far-reaching, so make sure to make this a part of your daily routine.

I know you’re here because you’re motivated to have a great relationship and I applaud you for taking steps to help your relationship thrive, but it doesn’t stop here.

For a much more complete discussion of how and why our bodies get so upset and why we need to relax, grab my free video series, From Conflict to Communication, to learn much more helpful and important tools that can help you build the relationship you want!

Check out my webinar, Connection and Closeness, this September 25th-28th.

Because fights are hurting your relationship?

My free video series will help you